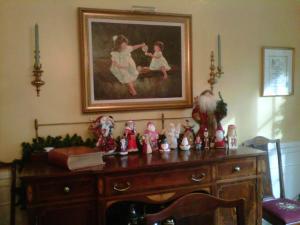 My Santa Collection in the dining room

Sleeplessness is so much worse during the holidays for me. I just LOVE Christmas, and even though I’ve “downscaled” my expectations of myself in recent years, there’s always so much I WANT to do. Those visions of sugarplums dancing in my head make getting a good night’s sleep next to impossible!

So I was up until 2 am last night, gloriously playing Christmas CDs by Amy Grant, James Taylor, Michael McDonald, Luther Vandross, Kenny G, and decorating away while my husband slept. My helper, Lisa (awesome – thanks, girl!), had helped me get all the boxes from the awkward attic yesterday. That little elf did all the bending and stooping and retrieving of more than a dozen large plastic containers and random boxes and framed seasonal artwork from their place in the back left part of attic that can only be accessed by the creakiest of disappearing stairs on the planet. We’ve lived in this almost 50-year old house for twelve Christmases now, and why I don’t figure out a better place for the Christmas boxes I just don’t know. Maybe when they get put away this year, Lisa will help me figure out a different system! (yeah, that’s what I said last year, too!)

Anyway, we started about 2:30 pm unsnapping green, red, white, blue lids, the stuffy aroma of sleeping table linens, towels, dishes wrapped in old newspaper from bygone years, treasured breakable decorations wrapped in wrinkled, faded, soft, well-used tissue paper, stockings, stocking hooks, my Santa collection, the Advent wreath, my many Christmas and winter snow books – for kids and adults, sweet handmade items from the kids’ preschool and elementary school days, the well-loved red “toy box” with the Christmas puzzles and puppets, which our 8 year old twin grandsons now run to with exclamations of “I remember THIS!”, just as my own daughters did 15 years ago.  I bopped around singing and humming along with James, Amy, Luther as we finally uncovered all the fake greenery to begin what I consider to be the first order of Christmas decorating business.

Two years ago I’d bought 4 bundles of nice new dark greenery on sale after Christmas but never found them last year, so we’d just used the ancient, shedding strands, having a heck of a time trying to figure out which ones were long enough to go where, my labeling system of previous years having been abandoned somewhere along the way. This year, we found the lost, new strands!  So we had more selection and could actually retire some for either my youngest daughter, who now has her own apartment, or to donate. Lisa and I unwound and fluffed greenery and nailed nails in their historical holes above the molding of the big picture window in the dining room, the rounded archways of the foyer, over the French doors in the living room, over the pantry doors and the side kitchen window, draped over the mantles of the two fireplaces, and along selected pieces of furniture and mirrors downstairs, and, of course, wound around the newell posts and up the rails of the staircase. Hanging greenery always makes me feel festive and it is the thing I hesitate to take down at the end of the season each year. Being indoors so much, I LOVE bringing the feeling of the outdoors inside with greenery, flowers, anything from nature. Going downstairs to get my coffee in the morning seeing the staircase draped with greenery just makes me smile! This weekend Michael will help with the tree, which will be visible as I descend the stairs, just beyond the archway in the living room, and my ultimate festive vision will be complete! My “happy place” for December!

the angel Nana painted for me years ago

still need "fluffing," but it's up there!

Meanwhile, long after Lisa had left and Michael had gone to bed, I found myself still wanting to stay up, cherishing the memories of Christmases past, still singing with James and Amy, my legs begging for rest, but my heart unable to leave undiscovered trinkets. I read inscriptions in the special, beautiful books given to the kids through the years. I even read some of the books. I untangled the strands of the hanging nativity given to me by a college dorm mate, and hung it in its traditional place between the kitchen and the den. I made a box of things I was ready to let go of for my girls to go through this year and claim for their own. I glued the baby Jesus back in place in his manger in my corn husk nativity set – the one I’d bought with my own money from a Neiman Marcus catalogue when I was a teenager in Little Rock. I’m considering handing this one down if it would mean something to one of my girls.

I stayed up until I’d been through every box except the ones holding the Christmas tree ornaments, knowing that will be another wistful evening’s activity. And then I slept. A few hours. Awaking before the alarm went off. Excited to continue the holiday preparations! CHRISTMASTIME IS HERE!

One thought on “Oh, the nights before Christmas!”